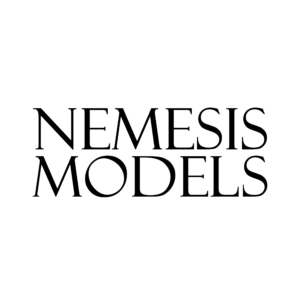 INITIAL BRIEF:
The client wanted a new logo for an existing business – one of the UK’s leading model agencies based in Manchester. The brief was short and sweet… to create a new ‘timeless/classic-looking’ logo that could compete with some of the biggest players in the model agency industry.

MY APPROACH:
After several weeks of research, and several ‘trial runs’, I decided to investigate the possibilities of creating something that was not too ‘in your face’, rather a timeless, typography based logo. I eventually chose this font as it had all the qualities the client had requested.

THE RESULT
Nemesis Models has rapidly become one of the biggest and best model agencies in the UK with many of their models being chosen by some of the biggest brands in the world to represent them in and on various media campaigns. They have recently started ‘Nemesis Kids’ off the back of the success of ‘Nemesis Models’.